Jim Self: Qrdar - Pranic Breathing $19.90
Back to products
Next product 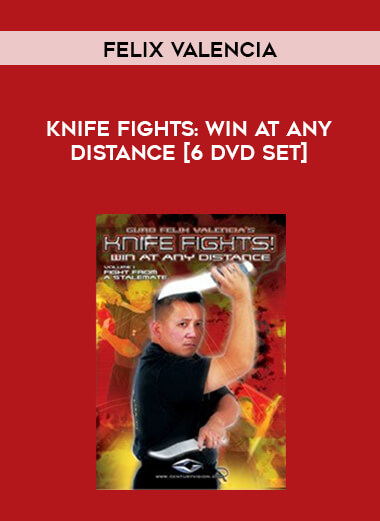 Felix Valencia is a senior instructor of Lameco Eskrima and one of the premier martial arts and law enforcement edged weapons training specialists in the US. He has provided defensive tactics training to numerous law enforcement agencies,

knife companies and firearm/weapons schools, including the Los Angeles Police Dept., Trident Knives, Gunsite and Close Quarter Battle. He has also worked as a fight choreographer for martial arts and action movies. This set of six volumes gives you the bladed techniques Felix teaches to his elite clientele.

Felix Valenica was born in the Philippines. He trained early in the Filipino Eskrima and Arnis Systems. He chose systems that work in the military and on the streets that allow him to flow without interruption between each range. Valencia became known as Edgars Brawler when he found a home within Punong Guro Edgar Sulites Filipino based system of LAMECO Eskrima. Valencia has worked with military and law enforcement agencies including the LAPD and FBI. Valencia is a two time inductee into the Filipino Martial arts Hall of Fame.

DVD 1 – Fight from a Stalemate

This volume includes knife on chest, forearm disarm to punch, groin strike, front hold ups, 360 on the body, push-pull, knife on hips, knife in front of arm, blade on neck, chokes, footwork, blade on back and double knife. All galvao until march 2013 $19.00
Add to wishlist
Start typing to see products you are looking for.